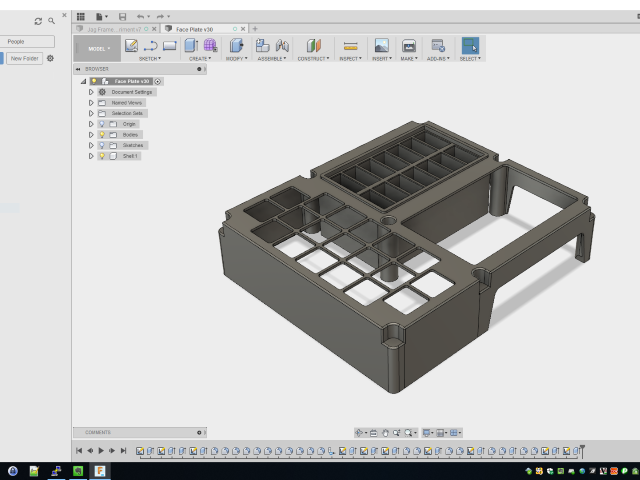 I've been interested in building a DSKY for a while. The DSKY is the display-keyboard interface for the Apollo Guidance Computer (AGC) built by MIT for NASA in the 60's. For whatever crazy, geeked-out reason, I think it will make a great conversation piece for my bar, and if I do a good enough job, maybe some people will be interested in kits so I can make a little money to offset the growing cost of the R2-D2 project.

I started about a month ago scratching around for original plans. I was hoping that since this was a NASA (government, public) project with a lot of interest ongoing from the classic computer community (with which I've previously had involvement, but that's another story), I would find good resources readily available. Alas, that does not seem to be. MIT and Raytheon apparently have these designs archived and not exposed to light. Most of the people that are building or have built replicas work from what they can get seeing them in museum exhibits. One in particular, Fran Blanche, has had the good fortune to actually touch and measure an actual flew-in-space unit, and even do some limited disassembly, for her project of recreating the unusual electroluminescent numeric display section. But, there are simply no published original drawings with dimensions in the public domain, at least not that I've found yet. There is, however, a really good open source emulator for the computer itself, and this is incorporated into many projects, and will be in mine.

So, from whatever Google results I can find, which is mostly pictures of both actual units and models, and whatever else I can glean, I have started the process of rendering a complete DSKY design in Fusion 360. My objective is to 3D print as many of the parts as possible into a credible design, as accurate as possible in external dimensions and features, but with modern supporting electronics and keyboard to be the front-end for the open source AGC emulator. I'm about to reach out to Fran, to gauge her willingness to share some of the dimensions she captured when handling a real AGC for her project. And if her project pans out, I'm hopeful that her numeric display would fit into my DSKY. For the moment, though, I plan on building the numeric display using off-the-shelf seven-segment LED displays behind 3D printed masks to achieve the proper digit size and shape. Although the original AGC/DSKY was largely made from die-cast parts, I'm hoping some effective use of paint will make it look close to original.

Really, getting the CAD right is the hardest part of the project, and the most important to me. The (modern) electronics to drive the annunciator panel, numeric display, and 19-key keyboard are as straightforward as can be (plan: a handful of MAX7219s driven by a Pi running both the emulator and the interface driver). Internally, anything goes to get the functions working. But externally, each module/component has to be as accurate as possible.