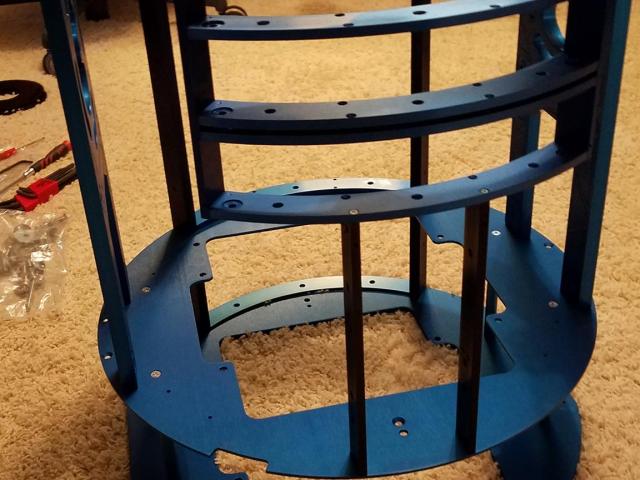 This project actually began in 2016, when my boys (then 11 and 9) decided it would be cool to build an R2D2. My older boy had just competed on an FLL robotics team, and knowing that he would soon outgrow both FLL and LEGO, I embraced this idea completely, even though I also knew that it would be months and years in the making, and probably cost thousands of dollars to do a credible job. But the opportunities for all of us are many: becoming fluent in CAD and 3D modeling, 3D printing, machining metal parts, mechanics, electronics, programming, etc.

I was aware of the R2D2 Builders' Club, and created an account on their site and began doing the research. The reality fully settled in, and I let the project cool its heels for a few months, but it was still very much on my mind. Eventually, I reasoned that the best way to get the project done would be to get something done (well begun is half done, as they say), so I decided we would forge ahead with an aluminum frame droid with basic features. As the boys' skills and interests grew, there would be ample opportunity to replace parts with more sophisticated versions. For example, I'm not planning on having the dome hatches hinged with all kinds of R2 accessories popping out for our first attempt. We could easily rework an existing dome or build an entirely new one later to provide that upgrade. The main goal of Version 1 is simply to get a good-loooking model. The one feature we will embrace for V1, as I will refer to it, is "2-3-2", the ability for the droid to transition from standing on two legs to three and back (movement possible in either configuration).

So, in November of 2017, I popped the cork on the project officially by ordering a Com8 frame with just a few of the basic options. It was a long wait (R2 builders and the people who make parts for them have lives, after all), but the frame arrived a few days ago. A couple of hours of assembly later, we had the standing frame.

Yesterday, I ordered some additional parts, mostly cosmetic pieces. Because the parts are built in waves by hobbyists, being alert to availability announcements and responding quickly are key to keeping the project moving, so I struck while the iron was hot on a data panel, utility arms, and logic surrounds.

So far, I've spent $1,410 for the frame, $195 for the utility arms, $58 for the data panel, and $108 for the logic surrounds. These are all aluminum parts, CNC-machined or water-jet cut, so they are indeed pricey. The total so far is $1,771, and it doesn't have legs, feet, motors, a dome, any electronics, and dozens of trim and decorative pieces to go. We will 3D print as many of the pieces as we can, as needed, and later replace them with other materials as appearance or strength/durability demand. I can see how we're in for a long, expensive ride.